ABCN is an alliance of Multiple organizations and separate individuals in the Bukharian Jewish Community. Founded with intent to collaborate in order to better serve the Community with various projects. To support each other and expand our networks and opportunities.

Since our youth, we have been accustomed to the circle of life. These come in many ways, including the celebrations and joy that surround a birth, the smiles and warmth shared at each milestone accomplishment, and ultimately the sadness of friends and family passing on as they arrive at the gates of the Olam HaEmet.

Since Passover 2020, a special group of people has undertaken efforts to understand what has led to a series of destruction to several headstones at the Mount Carmel Cemetery located in the 66-02 Cooper Avenue Glendale NY, 11385. The community magazine - Bukharian Jewish Link, met with the members of the All Bukharian Community Network (ABCN) to clarify this unfortunate situation.

The efforts of those involved revealed a sequence of violations in terms of the standards of the work performed by various units, namely the cemetery employees, the companies that manufacture and subsequently install the monuments, and the organizations leading the funeral services for our loved ones. Moreover, and most astonishing, was the source for many of the violations – community ignorance. “We must educate and inform our friends and family of the proper methodology for funeral services,” explained one senior member involved with the committee. “Currently, members of our community are in a state of complete unfamiliarity with the halachic guidelines, and as a result, there are unprecedented shortcomings and omissions associated with funerals every day.” 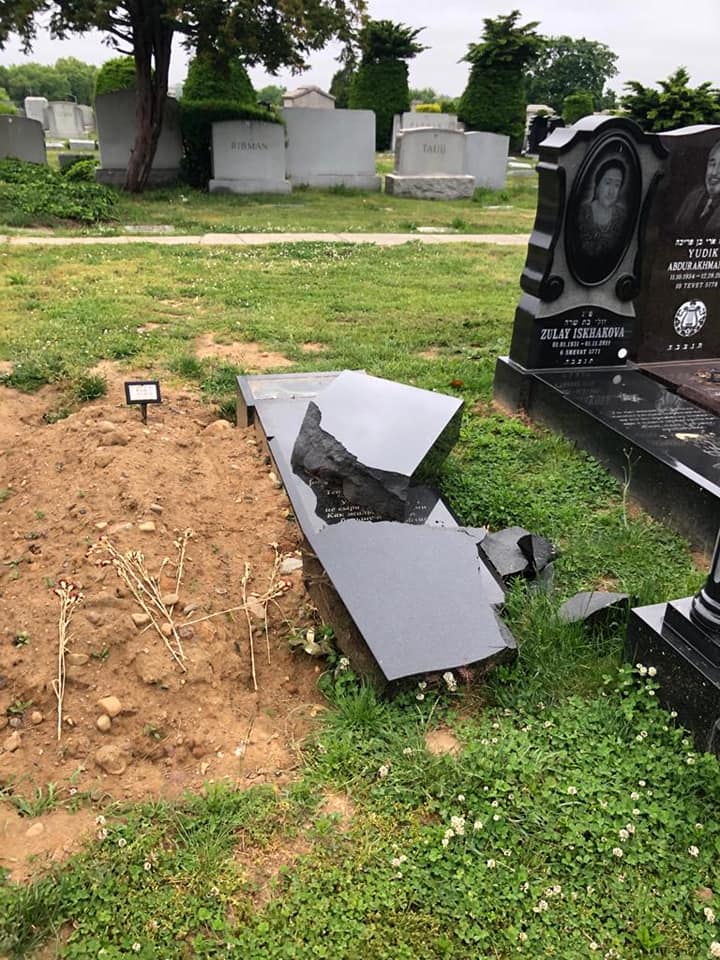 For readers to understand the severity of the issue, we cite how the circumstances often play out. A family is suddenly hit with the tragedy of the passing of a loved one. In turn, the family calls upon a local rabbi or funeral home for advice on the procedures that follow. For the family, it is vital to ensure that the organization chosen is both reliable and reputable. Presently, it is ever so critical to ascertain the correct dimensions of the deceased, the physical remains of the departed, as these proportions are critical in selecting a proper coffin and associated container.

It is important to note that the presence of a concrete container is a prerequisite for the subsequent installation of a lying stone, a key element of the monument. If no container is present at the time of the burial, then according to the conditions of the cemetery, the installation of a headstone is not allowed. 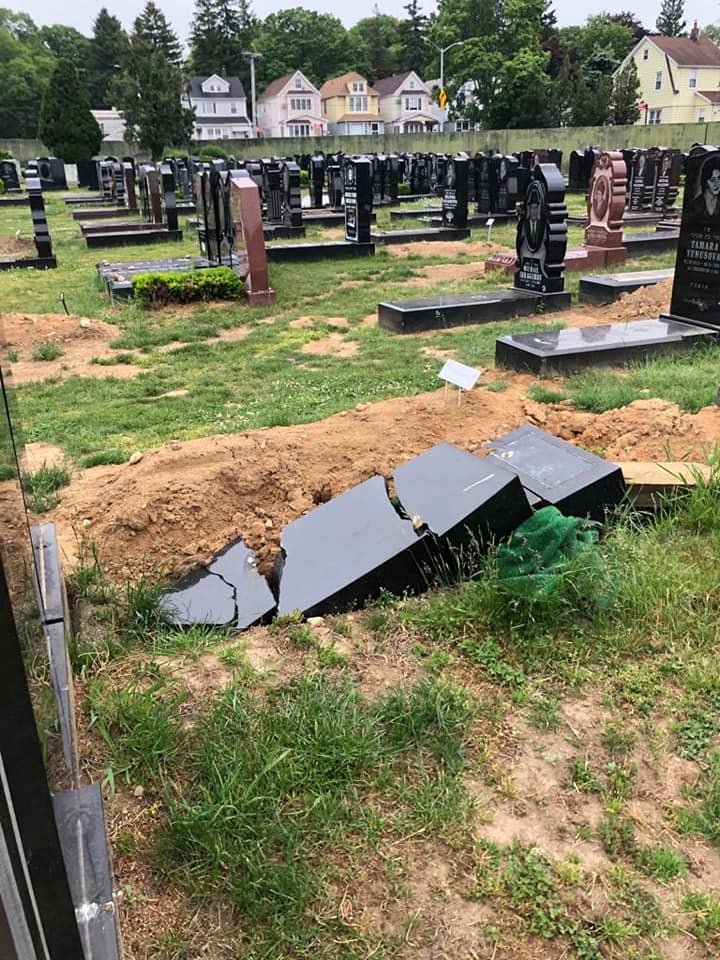 Due to the incompetencies of cemetery workers, such a development led to a sorry turn of events for a few couples. After the passing of one spouse, concrete is poured beneath the grave. This process considers the prospect of a burial plot for the living spouse. However, later, when the spouse passes, the family is only then informed that a second container cannot be installed, meaning that a monument for the newly deceased individual cannot be erected.

In another unpleasant occurrence, a community member passed and his beloved wife reached out to a local rabbinical figure, who in turn advised her to solicit the assistance of a Brooklyn-based funeral home. During the processing of the arrangements, this funeral home did not arrange for a properly sized container to be built, despite the wife indicating the deceased’s dimensions. To make matters worse, the situation was unfolding in the cemetery on a late Friday afternoon, Erev Shabbat. A funeral home rep offered to change the entire container or change the coffin for a smaller one. With only hours before Shabbat, it was deemed unwise to swap the container as the manufacturer was not based in New York, and delivery would be several hours. A new coffin was hastily arranged, but when lowered, the container tragically split, due to low quality. Ultimately, a new container was ordered, but the situation could easily have been avoided. 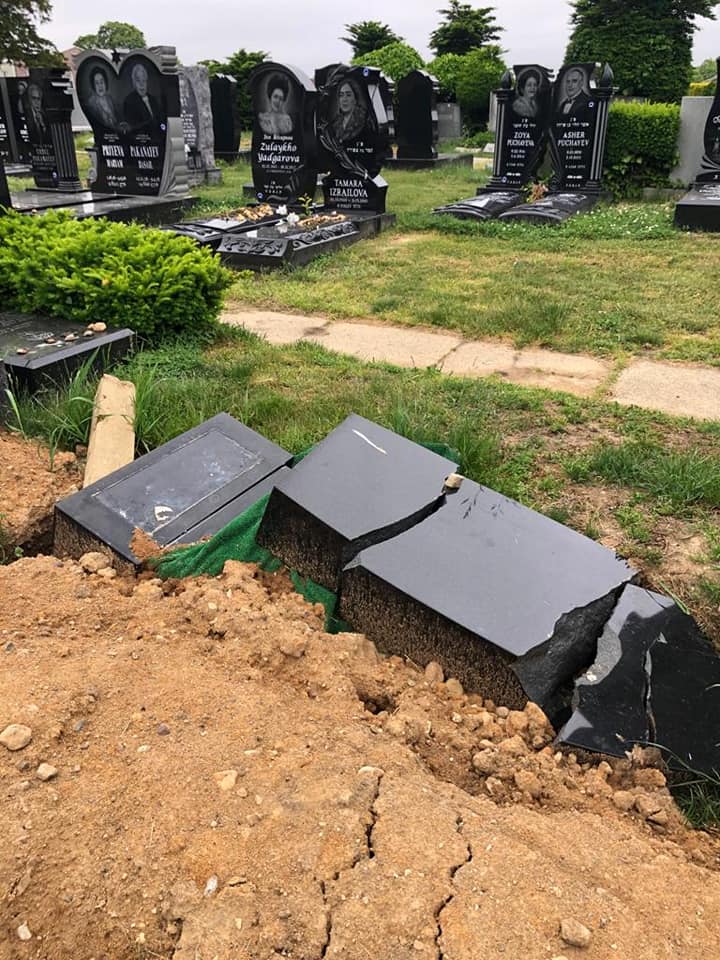 Under New York State’s established cemetery laws, the responsibility for making, installing, and pouring the concrete for a future monument rests solely with the monument manufacturing company. The same law also indicates that this business works in partnership with the cemetery to notify the family of both the date of pouring the foundation, as well as the date of the installation of the monument. This same company then chooses both the licensed contractor for pouring concrete under the foundation and a separate contractor for the installation of the monument. Here is where our investigation revealed flaws leading to catastrophic consequences in the technological process that led to monuments collapsing.

Findings show that Mount Carmel Cemetery, on its own initiative, changed current regulations, where the families would write a check for the pouring of concrete to the monument company, and the monument company simply transfers these funds to the cemetery for the pouring of the cement. The cemetery was not obligated to provide documentation or a calculation for the cost of work, not to mention a guarantee of their quality and compliance with the technological parameters when pouring the foundation. This all leads to - nobody to blame if there is an issue with the foundation, regarding the amount of concrete or its quality. Legally speaking, one would summon the monument company, but it is the cemetery that conducts the work. 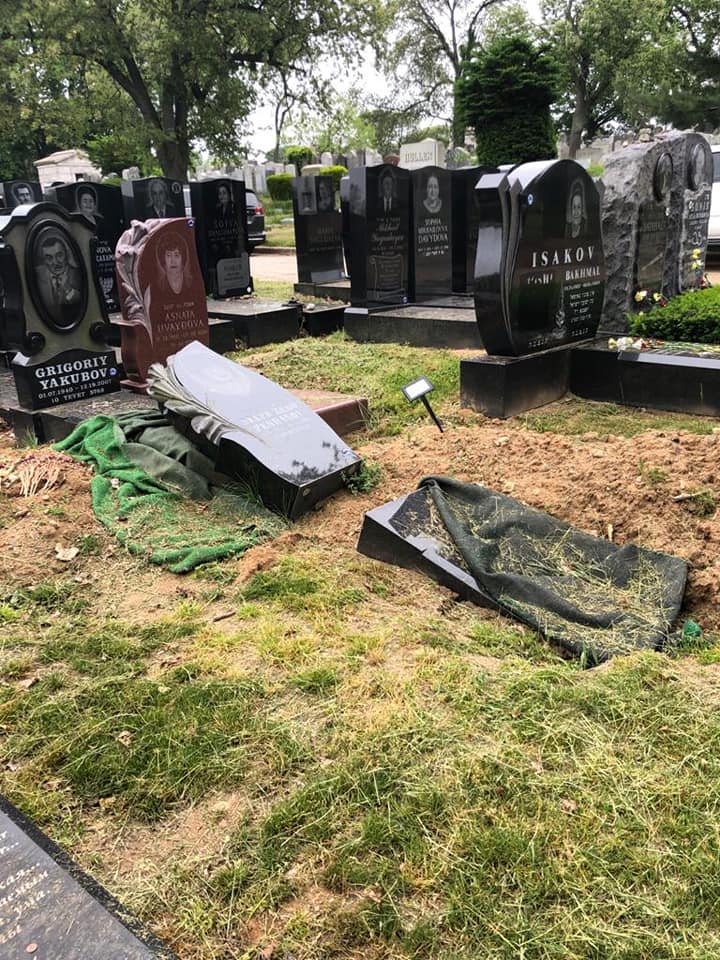 One known issue that arises is the need to thoroughly clean the surface where concrete will be poured and ensure there are no dirt or impurities. Why would this be important? When the earth is being dug, and another grave is adjacent, the vibrations of the soil cause the concrete to be displaced from the unclean surface, leading to a collapse of the monument. Such a scenario can be avoided if the family were present when the concrete is poured, they could watch for such details as cleaning the surface from dirt before pouring the cement.

Another known reason for the destruction of monuments is associated with the process of mechanically excavating graves to the required depth using heavy machinery. During this practice issues arise, like an excavator hitting a nearby cement container, leading to the instantaneous destruction of an earlier erected monument.

Evidence exists of cemetery workers failing to take safety precautions when using an excavator, as opposed to digging by hand, when excavating the earth for the preparation of pouring the foundation. This process results in the lid of a nearby container potentially being touched, and the possibility of concrete being poured near a damaged container. With the passing of time, the weight of gravity can cause further issues.

Furthermore, the process known as shoring can cause an adjacent monument to subside. During excavation, it is necessary to reinforce nearby monuments with temporary soil to avoid such a situation.

Despite all the technological violations, the cemetery workers themselves criticize the poor quality of the concrete containers as the prime reason for a monument’s collapse.

For a deeper understanding, ABCN representatives visited the management of a Connecticut container factory. The discussion revealed that a typical container can hold 5,600 pounds. A request was made to strengthen the walls and the lid of the container by increasing the diameter of the reinforcement placed in its frame. The factory management agreed to these terms with a promise to provide ABCN’s licensed engineer with the calculations.

In early September 2020, ABCN provided Mount Carmel with a licensed engineer that provided a layout of the correct procedures for the pouring of concrete. To date, the cemetery has commissioned a senior cemetery manager to work closely with an ABCN envoy. This partnership has led to the cemetery discontinuing the process that began in June where concrete for the foundation was poured with two independent columns. On October 13, 2020 the cemetery began using the recommendations of the ABCN’s licensed engineer. Additionally, an agreement was reached for the repair of 80 incorrectly filled foundations during the period of June through August. Further meetings have been postponed as the season concluded on November 3. 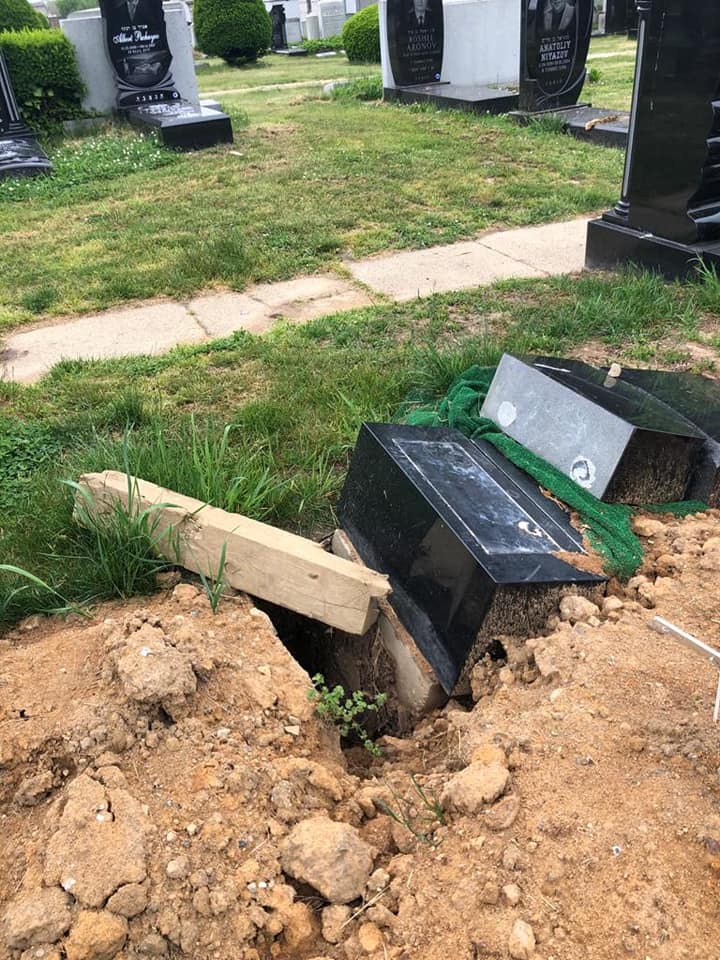 In recent days ABCN has been informed of yet another alarming happening. While prepping a gravesite, by digging out the dirt and pouring the concrete, cemetery workers used the weighty tremendous wheels of a tractor – well over 5000 lbs. – to run over fresh burials that had not yet had concrete installed. This process results in the following outcome: The fresh soil of the recent burial, roughly 3000 lbs., is pressurized with the tractor causing an overload to the container that is designed for only 5600 pounds. This container can then crack causing a new sequence of troubles.

For the above-outlined reasons, the presence of relatives during these procedures would help to exclude such errors from ever occurring. It is a simple shame and reason for the sadness that all these glaring oversights are taking place while our community network is conducting its investigation. 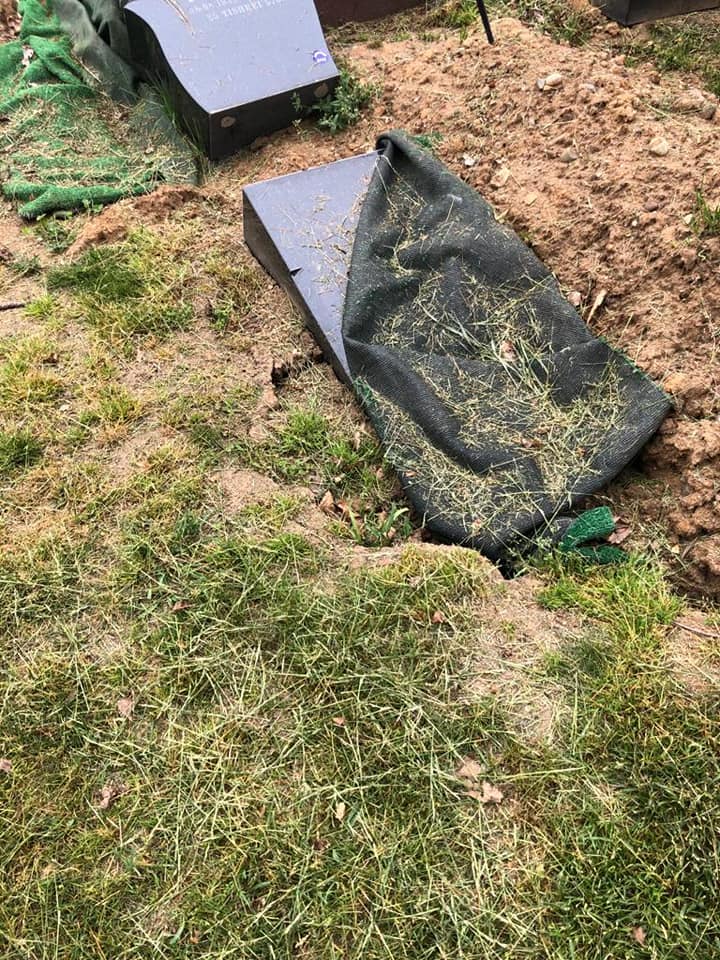 It is certainly not okay for us to continue to remain quiet.

In a related dialogue, a family wants to take full advantage of the purchased area. Instead of using a container that is 75 inches long, they obtain a container 12 inches longer giving ample free area for both the legs and head of the departed. Unfortunately, this is a monumental mistake resulting in the entire load of the monument being placed on the head area of the container and not on the ground.

The notion has also come to light that the cemetery does not allow the use of the full 96-inch pieces of land bought and the cemetery instead tries to only use 75 inches. Again, we cannot remain silent. 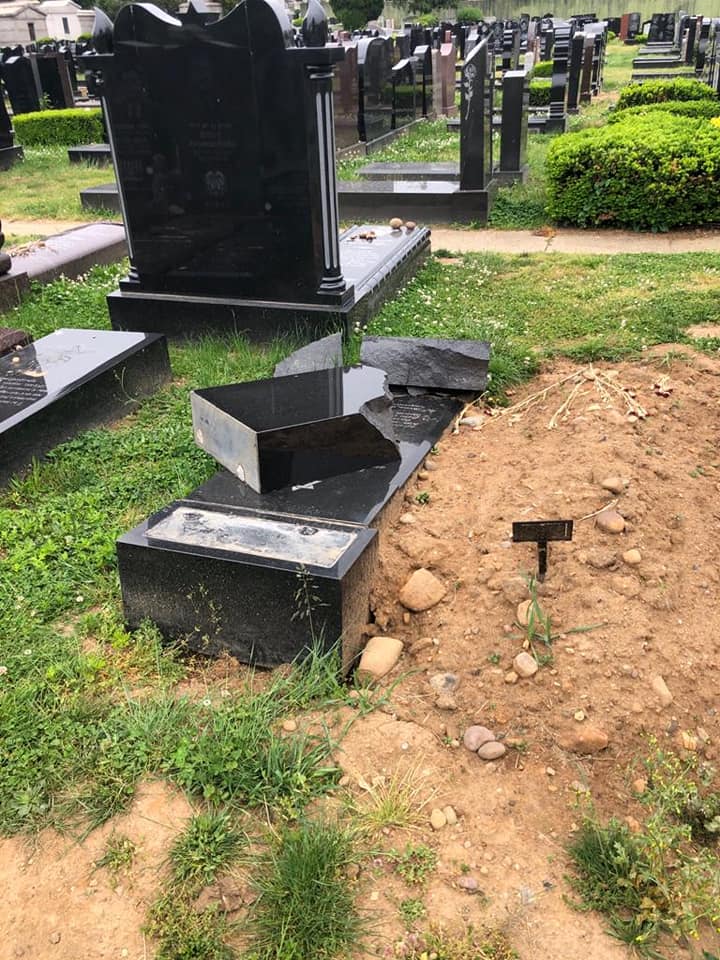 The ABCN commission defines the violations that caused monuments to collapse at Mount Carmel Cemetery as follows:

The excavation of the earth is handled improperly, especially regarding the lack of the fortifications of adjacent graves.

There is incorrect positioning of the concrete container, as it is not centered.

There is not enough space for the correct pouring of the foundation.

Unsuitable container sizes are used that do not correspond to the size of the coffin.

There are no settings for a correct bond of the poured concrete for the foundation with the container lid.

It is necessary to pour crushed stone under the container before installing it, in addition to using reinforced concrete.

The quality of the concrete container is of great importance.

There is an improper attitude of funeral homes in their direct responsibilities to the families of the departed.

The ABCN calls upon the community to create a committee for the control and interaction with funeral homes and the cemetery. This group should pay special attention to the issue of price for the services performed. 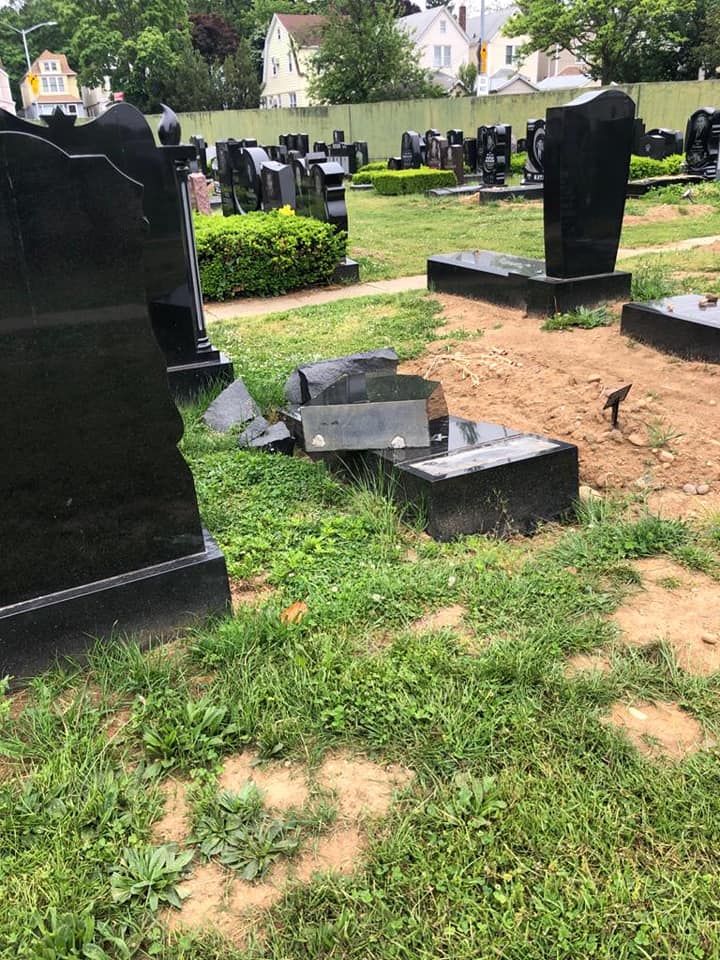